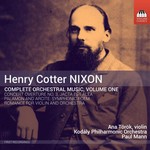 The English composer-conductor Henry Cotter Nixon (1842-1907) has entirely disappeared from music history. But this new series - presenting all his surviving orchestral music in its first-ever recordings - reveals Nixon to have been one of the most accomplished English composers of his generation, with a style that takes in elements of Mendelssohn, Schumann, Verdi and Brahms. Nixon labelled his five-movement Palamon and Arcite a symphonic poem (it is one of the first by a British composer), but it has much in common with the programmatic symphonies of contemporary composers such as Goldmark and Raff.