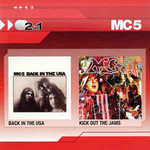 MC5
Back In The USA / Kick Out The Jams

"Warner Music slips the first two albums by the legendary Detroit rock band the MC5 into a slipcase in reverse order as a way of clearing inventory off the shelves. Since they were packaging two-fers, they might have just gone ahead and added High Time to the mix and made it all three. As it stands, this set showcases two very different sides of the band. The first album, Kick out the Jams, was recorded live at the Grande Ballroom in the Motor City and showcases the group in a wild, freewheeling, rebellious, noisy, and utterly breathtaking way. Back in the USA presents a clear sound, and looks back more to the band's early influences from Chuck Berry and Little Richard to the songs they wrote earlier on which reflected those influences, in a more timely context. The second album was slagged off upon release, but has weathered the years very well, and the debut is an undisputed rock classic. Neither of these CDs comes with bonus material, but if you don't already have them, this is a great introduction to one of the most influential bands in rock history."