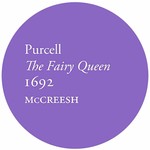 Purcell's The Fairy Queen is based on Shakespeare's A Midsummer Night's Dream, a play not frequently performed in the late 17th century, nor very well regarded ("the most insipid ridiculous play that ever I saw in my life" - Samuel Pepys' diary, 1662). Despite this, the play would go on to work well within an opera, as the characters of Pyramus and Thisbe could conjure up singing and dancing accomplices. Purcell's masterful composition, Gabrieli's first-class performance, and McCreesh's superb interpretation demonstrate why their recordings are seen as some of the best in classical music today.

Gabrieli are world-renowned interpreters of great vocal and instrumental repertoire, from the Renaissance to the present day. Founded by Paul McCreesh in 1982, Gabrieli have both outgrown and remained true to their original identity: whilst the ensemble's repertoire has expanded beyond any expectation, McCreesh's ever-questioning spirit, expressive musicianship and a healthy degree of iconoclasm remain constant and are reflected in the ensemble's dynamic performances. Gabrieli's repertoire includes major works of the oratorio tradition, virtuosic a cappella programmes and mould-breaking reconstructions of music for historical events. Above all, Gabrieli aims to create thought-provoking performances which stand out from the crowd.

"The flexible interactions between nine soloists (with three additional singers in choruses) is impeccable...Sampson's gossamer-like 'Ye gentle spirits of the air' is accompanied with imagination and tact by harpsichordist Jan Waterfield...Even if a splash more extrovert energy and tauter speeds here and there might have yielded more theatrical fizz, McCreesh's labour of love has abundant nuances and transcendent beauty.." Gramophone Magazine Editor's Choice June 2020

"McCreesh's production rises to the occasion: original voicing, unorthodox continuo, project-specific trumpet design and rediscovered string techniques bring out qualities missing from earlier recordings. The choir transforms on command from a lightly teasing ensemble to a thundering chorus…Singers' additions, which stand out gloriously against a plucked-string-only accompaniment, cause amorous solos to ooze desire…Extremes, as McCreesh shows, belong to the fantastic worlds of The Fairy Queen." Five Stars BBC Music Opera Choice of the Month July 2020