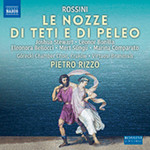 Rossini's Neapolitan theatrical debut in 1815 won him overnight esteem as well as the favour of the Bourbon dynasty, ensuring lucrative contracts and commissions. The following year he composed Le nozze di Teti e di Peleo, an allegorical cantata on the theme of the wedding between the sea goddess Thetis and the hero Peleus. Written to celebrate a royal marriage, it is an intensely theatrical work in which Rossini drew on some of the greatest contemporary singers, specialists in the ornamented bel canto style, and created a staged spectacular with chorus and a wealth of colourful orchestration.