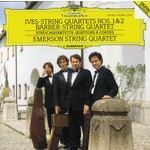 "Barber's string quartet is the source of that famous Adagio for strings, popularized by the movie Platoon in its later arrangement for full string orchestra. It makes an even stronger impression in its original context, sandwiched between two thematically related quicker movements. Ives's two quartets represent the two opposing poles of his character: the early First Quartet is a lyrical work based on hymn tunes, while in the Second all hell breaks loose as the four players literally fling themselves at the music (and each other), until they finally decide--in the words of the composer--to shut up, go out, and view the firmament. The end is suitably cosmic, as are these stunning performances." --David Hurwitz