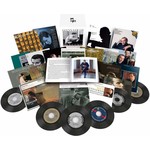 This stunning set is packed in a cube-shaped box and includes facsimile LP and CD Sleeves, a 240 page hardcover book featuring complete original liner notes (many penned by Gould himself) and an introductory essay by Michael Stegemann.

"I think that if I were required to spend the rest of my life on a desert island, and to listen to or play the music of any one composer during all that time, that composer would almost certainly be Bach. I really can't think of any other music which is so all-encompassing, which moves me so deeply and so consistently, and which, to use a rather imprecise word, is valuable beyond all of its skill and brilliance for something more meaningful that that - it's humanity." - Glenn Gould

Glenn Gould was one of the best known and revered pianists of the 20th century. His performances of works by Bach, Beethoven and Mozart received critical acclaimed and international adoration.

In addition to being an outstanding pianist, Gould was also a revered composer and conductor and recipient of numerous awards including three Juno awards and five Grammy awards.