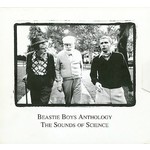 At the close of the '90s, the Beastie Boys had only released five albums, which may not seem like enough music to provide the foundation for a double-disc retrospective. But between 1981 and 1999, they released countless B-sides, non-LP singles, and EPs, resulting in a sprawling discography ripe for a compilation. So, in 1999, the Beasties released the two-disc compilation The Sounds of Science, which covers every incarnation of the band from Pollywog Stew to Hello Nasty. Inevitably, some well-known songs are missing -- only three cuts from Licensed to Ill are here, and their breakthrough single "Rock Hard" had to be pulled when AC/DC refused permission for a sample. Ultimately, that doesn't matter, since the set captures the spirit of the Beasties so well. Usually, compilations that don't follow chronological order are a little muddled, but The Sounds of Science benefits from its jumbled sequencing, since it emphasizes the band's astonishing musical reach and consistency. After all, every album since Paul's Boutique has followed a similarly unpredictable pattern, as the group moved from hip-hop to punk to funk to jazz. What's remarkable about The Sounds of Science is that it has all the obvious suspects, but since they're rubbing singles with album tracks and B-sides like "Skills to Pay the Bills," two outtakes from the abandoned country album, alternate versions of "Jimmy James" and "Three MC's and One DJ," Fatboy Slim's brilliant remix of "Body Movin'," goofs like the Biz Markie-sung cover of "Benny and the Jets," and the excellent new single "Alive," it all sounds fresh. There's much more than hits here, but The Sounds of Science achieves something most anthologies don't: it summarizes the attitude and spirit of the band, while offering some new revelations even for dedicated fans.