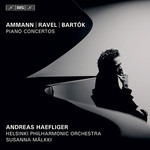 When Andreas Haefliger conceived this unusual combination of concertos it was with the aim of putting into perspective three pieces, each a unique and highly expressive highlight from the composers' output. That Maurice Ravel's Concerto for the Left Hand and Béla Bartók's Third Piano Concerto fulfilled the requirements was a given: towards the end of his life Bartók wrote his most lyrically expressive concerto while Ravel, inspired by the qualities of the left hand register, wrote a piece full of dark yearning and grotesquely fauvistic dances.

The third work was more of a gamble, being a newly commissioned and not yet written concerto. The risk was a calculated one, however, given the stellar reputation of the composer Dieter Ammann, as well as Haefliger's personal acquaintance with him. But as Haefliger himself remarks: 'Little could have prepared me for the exceptional work I was to receive: The Piano Concerto - Gran Toccata. Keeping tradition close by as an ally in the layering of harmony and rhythm, it explodes into futuristic visions in an extremely personal language and, through its kaleidoscopic colours and pianistic virtuosity, reinvents the genre for the 21st century.' The concerto was premiered at the 2019 BBC Proms, and Andreas Haefliger has since performed it in Boston, Munich and Helsinki, where the present recording was made. On all three occasions, he has been partnered by Susanna Mälkki, chief conductor of the Helsinki Philharmonic Orchestra which lends Haefliger eminent support in all three works.

'Ammann delivers a rollercoaster ride of incredible rhythmic energy...After the mesmeric impact of Ammann's work, it's probably a good idea to pause before proceeding to the two other concertos. Both receive fine performances from these artists supported by nimble orchestral playing from the Helsinki Philharmonic...Haefliger is a very thoughtful player, bringing a variety of approaches to the different movements of the Bartók.'
BBC Music - Concerto Choice of the Month. January 2021