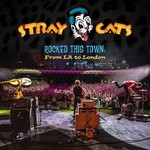 Stray Cats
Rocked This Town: From LA To London (LP)

This collection of 23 tracks recorded during the band's critically acclaimed 40th Anniversary Tour in 2019 combines their unparalleled virtuosity and red-hot rock & roll spirit, all raw and completely live-the way it was played on sweaty stages around the world.