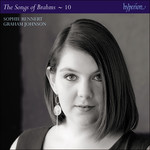 Perfectly judged performances, intelligently planned recitals, informative booklet notes and, throughout, accompaniments from a true master of the art: this ﬁnal release in the songs of Brahms epitomizes all the familiar virtues which have distinguished the series.

Brahms, like Schumann, but unlike Schubert with his much greater output, issued the majority of his songs in opus number groupings. There is a tendency in modern scholarship to suggest that he envisaged, or at least hoped for, performances of his songs in their original opus number groupings. Of course, one cannot deny that some planning (though of a rather variable kind) went into the arrangement of these song bouquets (the composer's own expression) for publication. Good order and cohesion in printed form (as in an anthology where poems are arranged to be discovered by the reader in a certain sequence) do not automatically transfer to the world of the recital platform where one encounters a host of different practical problems, casting (male or female singer) and key-sequences (high or low voice) among them.

Printed poetry collections are as lovingly assembled as an opus of a composer's varied settings, but this does not mean the poems therein are designed to be read aloud from cover to cover: the compiler of these volumes, whether or not the poet himself, would expect items to be selected by the reader according to taste or need. The anthology (or indeed opus number) might be likened to a well-ordered jewel case from which precious items may be extracted for use, depending on the occasion: the wearing in public of every item therein on a single occasion would be both impractical and vulgar. There is little evidence, especially from concert practice of the time (where items from the Schubert and Schumann cycles were often ruthlessly excerpted), that Brahms's publications were conceived within a spirit of cyclic unity that called for an integral performance of the entire group.

Each disc of the Hyperion edition takes a journey through the career of Johannes Brahms. The songs are not quite sung in strict chronological sequence (Brahms had a way of including earlier songs in later opus numbers) but they do appear here more or less in the order that the songs were presented to the world. Each recital represents a different journey through the repertoire (and thus through Brahms's life).

We can imagine certain (but by no means all) of these groups of songs grouped and published together for various reasons, but it is quite unclear whether Brahms was making a point thereby. Far from dreaming of complete evenings of his songs in public performance, he preferred to hear no more than three of his own songs in any one concert. This astonishing information comes from an invaluable book of essays: K Hamilton and N Loges, eds: Brahms in the Home and the Concert Hall. Between Private and Public Performance (Cambridge: CUP). The conventions of music in the home, where so many songs were first heard and discussed in an environment of lively and cultivated enthusiasm, did not include listeners buckling down in respectful silence to a substantial sequence of songs, as if they were at a public concert. Brahms seems to have been happiest hearing his songs as Hausmusik and surrounded by supportive informality-and I dare say Schubert would have said the same about the Schubertiads. The present-day hunger for cycles-hidden, implicit, unknown or concealed-seeks to feed the appetite for a kind of recital format that is favoured, perhaps over-favoured, in the twenty-first century, but was almost unknown in the nineteenth.

It is clear, however, that certain opus numbers have long been more usually presented in their entirety, and this album has two such examples: excerpts from Zigeunerlieder, Op 103, are more rare in recital than performances of the whole work, and once a singer has found a violist skilled enough to rehearse and play one of the two songs of Op 91, it would be a foolish waste of resources in a concert not to perform both pieces. These are rare examples of Brahms songs that were clearly meant to be heard in the totality of their original groupings.

'Sophie Rennert's voice is magnificently burnished, full and deep … the songs with viola form the centrepiece of the disc, and one could hardly hope for a finer exponent of the obbligato part than Lawrence Power … Graham Johnson, of course, needs no introduction, and everything one associates with him-the intelligence, the high musicality, the technical perfection-is here in spades' (MusicWeb International)