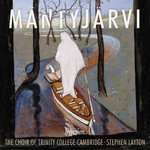 The stylistic pluralism which informs so much contemporary choral writing pays rich dividends in the work of Jaakko Mäntyjärvi-a thrilling programme of some exciting, accessible, contemporary music.

The close of the twentieth century and the opening of the twenty-first have seen many changes in the world of sacred choral composition. There, as in other genres, the doctrinaire modernism prevalent in the 1970s and 1980s has gradually given ground to a postmodern acceptance of tonal, broadly consonant simplicity. Simultaneously, expansion of the recording industry online has placed a boundless diversity of materials and traditions within the reach of all music lovers. Meanwhile, the work of composers such as Arvo Pärt, John Tavener and Eric Whitacre has captured the imaginations of a consumer public embracing the concept of 'world music'. Stylistic boundaries have sometimes been fruitfully eroded and, in the process, music that once would have been seen as the preserve exclusively of one or another Church has not only become a melting pot of different traditions; it has also migrated away from its sacred origins, into the concert hall, encouraged by a secular generation's thirst for abstract spirituality rather than for organized, clearly defined religion. Indeed, that migration may have considerably earlier origins: the title of Stravinsky's Symphony of Psalms, first heard in 1930, already presents a collision of the sacred and the secular, as do its dedications: to the glory of God, in emulation of Bach's habitual inscription, and to the Boston Symphony Orchestra.

Despite Mäntyjärvi's extensive setting of Latin texts, the informing aesthetic of this music is catholic with a small 'c': enriched and deepened by its breadth of stylistic allusion and yet wholly distinctive in its eclecticism.

"A fabulous disc in terms of performance, music, recording and accompanying documentation" MusicWeb