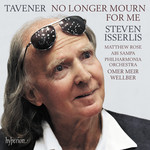 An important release which again demonstrates Steven Isserlis's deep commitment to the music of John Tavener. The realization of the album is movingly detailed in a booklet note which provides an eloquent counterpoint and commentary to the performances.

"This recording could hardly have been a more personal project. Not long after the first performances of The death of Ivan Ilyich and the present version of Mahámátar at an all-Tavener concert at the Manchester International Festival in 2013, I called John to tell him that I'd spoken to Hyperion Records, and that we were keen to record both pieces. I remember being surprised, and touched, by how happy John seemed to be about the idea; after all, his music was scarcely under-performed at that point. But in fact, his perennial insecurity had been exacerbated by terrible health problems following his major heart attack in 2007; it had taken him a long time to get back to composing, and he was anxious about the quality and accessibility of the pieces written immediately after that time. As I hope this recording demonstrates, he needn't have worried-his last works are among the most powerfully beautiful he ever composed. Furthermore, he was spreading his compositional wings in new and sometimes unexpected directions. Having passed through a long period of writing pieces almost exclusively influenced by the music of the Orthodox Church, he had become far more open to other religions and cultures. Indeed, this album consists of an extraordinary mixture of inspirations: from the Anglican Cathedral tradition through Tolstoy (incorporating elements of Russian Orthodoxy) to Catholicism, Islam, and finally Shakespeare."

"Here is a disc that proves to be much more than the sum of its parts. At first sight, it appears to be something of a patchwork, with arrangements for cello ensemble of two of Tavener's choral works (the Preces and Responses and No longer mourn for me) surrounding three more substantial compositions. But in fact Steven Isserlis has understood how to draw out the vocal quality in both those pieces and adapt it superbly for the eight cellos." Gramophone Editor's Choice November 2020

"These are among Tavener's most powerful works. They are magnificently performed. Those simple points could easily be lost in the necessity of charting not just the diverse range of music and influences, but also the profoundly personal nature for Steven Isserlis of this remarkable disc. His effective arrangements of two choral pieces for an ensemble of eight cellos frame the disc...the Philharmonia under Omer Meir Wellber are assured advocates." Recording of the Month - BBC Music Award WINNER - Premier Award 2021