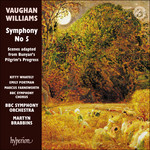 Vaughan Williams's incidental music for The Pilgrim's Progress has seldom been heard in its original guise since the 1906 premiere; yet further reason to acquire an outstanding interpretation of the composer's Symphony No 5.

This inscription at the head of Vaughan Williams's Symphony No 5 in D major prefaced the third such work he was to dedicate to a fellow composer. The symphony's first performance took place on 24 June 1943 at the Royal Albert Hall in London, conducted by Vaughan Williams himself. The orchestra was the London Philharmonic and the occasion was a Henry Wood Promenade Concert in which the other works were conducted by Basil Cameron-Wood himself was meant to have conducted but was ill. The critic Denby Richards, present at rehearsals and the performance, recalled that Vaughan Williams, on addressing the players, told them that he was not a professional conductor, yet he had faith in the work, and asked them 'not to take too much notice of me-just make music'

...However, it is the moral strength of the story that so clearly inspired Vaughan Williams over the decades. As has been pointed out, he tackles the opposing forces of good and evil in his own way: in the context of Bunyan the opposing forces are seen to have been brought closer together, the composer having his pulse more firmly on that of good and beauty throughout-a humanist concept, and profoundly a part of Vaughan Williams's innate character and art.

"Brabbins and his musicians generally give a glowing and contemplative account of the Fifth Symphony (1943), its colours well captured in producer Andrew Keener's fine recording" BBC Music

"Brabbins's Vaughan Williams symphony cycle goes from strength to strength with an outstanding Fifth from strength to strength with this impressively cogent, self-effacing Fifth, a reading notable for its unhurried demeanour, clarity of texture and orchestral playing of conspicuous finesse and lustre…The coupling could hardly be more intriguing...A rather special release, this, and emphatically not to be missed." Gramophone

Janácek: The diary of one who disappeared & other works