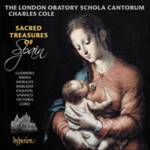 Sacred treasures of Spain, the second in our series of recordings of liturgical music, celebrates the extraordinary creative output of composers working during the Siglo de Oro. Philip II's reign during the second half of the sixteenth century was truly a golden age in terms of the amazing wealth of riches which emerged at the hands of the greatest composers working in Catholic Spain. This recording represents a handful of these composers, all in some way interconnected, and in particular focuses on the two liturgical powerhouses of Philip II's kingdom: the cathedrals of Seville and Toledo. All the motets featured here are drawn from the Schola's repertory and are sung in the context of the liturgy at the London Oratory.

Music played an important role at St Philip Neri's first Oratory in Rome, both in the regular liturgy and also in the musical oratories which were pioneered there, combining readings, meditations and music as an aid to prayer. The Chiesa Nuova, where the Roman Oratory ultimately became established, drew in the young and fostered their faith. We aim to continue this mission, immersing the boys of the Schola in this repertory which so perfectly expresses truth, and we are delighted to be able to share this music and its higher purposes with a wider audience.

Please note: This album was briefly available on the AimHigher / DeMontfort Music label in 2019.