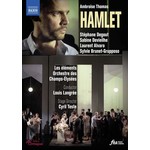 With Shakespearian operas all the rage in Paris during the 19th century, Ambroise Thomas and his librettists Michel Carré and Jules Barbier adapted Hamlet to create a romantic spectacle in which the character of Ophélie shines with a haunting radiance. With its virtuosic arias, stunning ensembles and vivid orchestration - with the colourful addition of the newly invented saxophone - Thomas composed one of the most successful operas in the French repertoire. This is further enhanced by director Cyril Teste's multi-layered production, reinstating its powerful original ending, and including cinematic techniques to create 'a very palpable hit' (bachtrack.com)

"[Degout] gives one of his greatest performances here, marvellously sung and acted...it's an extraordinary achievement. Devieilhe makes an outstanding Ophélie, touching and vulnerable, her coloratura dazzlingly precise but never vacuously showy...Langrée really knows how to make this music live and breathe, and the playing, choral singing and recorded sound are all exemplary...Buy it and watch it, above all for Degout, who is unmissable and unforgettable." Gramophone DVD of the Month April 2020

"In this exemplary staging, offering the highest musical standards, and with an all-French cast presenting the text with authority and seriousness, it registers as nothing short of a masterpiece…Testé and the singers draw a network of complex but increasingly fractured relationships between the central characters, each one of them sung with complete technical command and presented with purpose and conviction." Opera