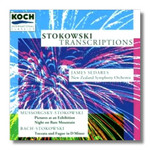 "To his and the NZSO's credit, James Sedares comes close to reanimating Stokowski, and if you don't quite see the white nimbus of hair or hear the suspicious Polish accent, the showman's spirit must have been present when these recordings were made. Sedares seems to have used Stokowski's recordings as a model, so even if these new performances don't tell us anything new about the music or the orchestrations, they do give us the next best thing to echt-Stokowski in splendid digital sound. The NZSO plays as if it wants to be mistaken for the Philadelphia or London Symphony Orchestras" ClassicalNet