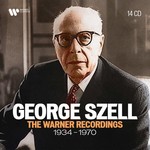 George Szell's commitment to musical truth made him an intimidating figure - even among the other formidable conductors of the 20th century. His uncompromising quest for perfection drew performances of exalted quality from soloists and orchestras. In particular, his long tenure as the Cleveland Orchestra's music director (1946-1970) established it firmly as one of the world's great ensembles. This 14-disc set encompasses Szell's entire HMV legacy. Beside such iconic recordings as Strauss's Vier letzte Lieder with Schwarzkopf, Brahms concertos with Oistrakh and Rostropovich, and the complete Beethoven piano concertos with Gilels, it includes several items making their first appearance on CD. Among these is an audio documentary which features rehearsals with Gilels and interviews with Szell and other distinguished figures.

Born in Budapest in 1897, Szell grew up in Vienna. A prodigious pianist and composer as a child, he later held conducting posts in Germany and Czechoslovakia, and his career in the USA, his home from 1939 to escape the Nazis, was furthered by none other than Arturo Toscanini.

According to author and critic Robert Layton, Szell is 'A perfectionist with an extraordinary ear and remarkable memory, his performances exhibited great dramatic intensity, an astonishing discipline and fire, a selfless pursuit of musical truth and a complete absence of intrusive interpretative mannerisms.'

Szell's greatest achievement was his stewardship of the Cleveland Orchestra which he took over in 1946, aged 49. Though the orchestra was the youngest and least fashionable of the American 'big five', it was Szell's aim to make it 'second to none', and not only in the US. Hi success was such, it out-ran his death in 1970. As Christoph von Dohnányi observed two decades later: 'When we give an outstanding concert abroad, George Szell gets a good review.'!

Though less voluminous than the Columbia ones, the complete recordings Szell made for EMI - now Warner - represent a significant part of his recorded legacy: Strauss's Vier letzte Lieder with Schwarzkopf, Brahms concertos with Oistrakh and Rostropovich, complete Beethoven piano concertos with Gilels, Dvořák 8th Symphony…

The set also includes the 78RPM era recordings among which the below make their first appearance on CD:

As a bonus, the box also includes an audio documentary, George Szell - A Memoir, which features rehearsals with Gilels and interviews with Szell, Dietrich Fischer-Dieskau and other distinguished figures.