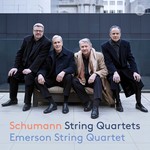 The Emerson String Quartet makes its PENTATONE debut with a recording of Schumann's three string quartets. Penned in the summer of 1842 during an exceptional peak of creativity, these quartets formed the beginning of a six-month surge during which most of Schumann's best chamber music saw the light. Inspired by the example of Beethoven, Schumann's quartets display a mastery of traditional forms, combined with typically Schumannian fantasy and lyricism, particularly in the inner movements. As such, they underline a new level of maturity in Schumann's artistic development, surpassing the fantastical aesthetic of previous years. The players of the Emerson String Quartet bring out the extraordinary freshness and originality of these works, and add another master composer's oeuvre to their impressive discography, after having recorded the complete string quartets of Beethoven, Mendelssohn, Brahms, Bartók, Webern and Shostakovich. The artistic strength of Schumann, whose life was dominated by alternating periods of depression and manic creativity, inspires and consoles the quartet members during the uncertain times of a pandemic, and his music may equally inspire listeners. Since its founding in 1976, the Emerson String Quartet is ranked among the world's most acclaimed chamber music ensembles.

'The Emerson's playing is on a predictably high level, technically speaking, and the quartet's sheer panache in the faster movements is often impressive...However, this music is about so much more...if it's plain-speaking you're after, you may warm to them more than I did.' Gramophone

'Here's playing that penetrates this music to a degree that surprised even a fully paid-up [Schumann] fan like me. The Emerson are such a fine ensemble, but they're also four strongly individual personalities. The element of dialogue in Schumann's quartet-writing is forefronted beautifully...This is also, hand on heart, the first time that I've really grasped these three works as a cycle. Listen to them in one sitting if you can: it's wonderfully illuminating and moving.' BBC Music Chamber Choice of the Month Feb 2021