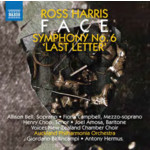 In Symphony No. 6 'Last Letter', Ross Harris explores settings of four poems by Vincent O'Sullivan, interlinking them with three musical interludes. The darkness of the subject matter draws from the composer music of powerful and at times despairing intensity. Face was written as the First World War centenary approached its conclusion and confronts the trauma of facial injuries suffered by soldiers in the conflict. Choruses and solos are punctuated by orchestral commentary, the music freely mixing tonal and atonal elements to heighten the expressive gravity of the personal tragedies depicted.

Britten: The Collector's Edition: The Masterpieces (37 CDs at a special price)