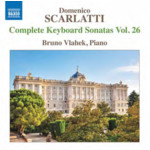 Domenico Scarlatti's magnificent sonatas were composed for the Infanta, who became Queen of Spain in 1746. Previous releases in this series have focused primarily on the sonatas contained in Venetian volumes but this one ranges further afield. It includes 13 sonatas from various Italian, Spanish and Portuguese archives notable for their refined ornamentation, brilliant figuration, rapid repeated notes and scales, and wide leaps, as well as music of meditative breadth and athletic vitality.