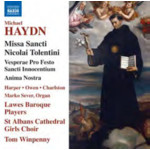 Michael Haydn's colourful and inventive music is uplifting and expressive in equal measure, but his music has been eclipsed by that of his elder brother Joseph, and by Mozart. Sacred music is central to Michael Haydn's oeuvre and was considered by some contemporary critics as superior to Joseph's. Encompassing a broad range of textures and styles, parts of the Missa Sancti Nicolai Tolentini demonstrate Haydn's music at its most exhilarating and energetic, and his supreme gift for empfindsames ('sensitive') lyrical writing is also to be heard in the Vespers.