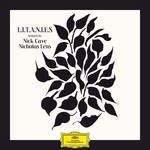 Having collaborated on Shell Shock in 2014, Cave and Lens joined forces again during the lockdown to create this new work. Memories of the magical stillness and of the inner peace that Lens experienced while visiting the Rinzai Zen temples in rural Japan, were the initial inspiration for the minimalistic, at times trance-like music of L.I.T.A.N.I.E.S, which features artists such as Denzil Delaere, Claron McFadden and Lens's artist daughter Clara-Lane on vocals. The eleven instrumentalists recorded their parts individually in Lens' home, to respect social distancing guidelines, but there is a clear unity of purpose about the finished opera, a work of gentle beauty.

Lens says: "The initial idea for L.I.T.A.N.I.E.S was born in the natural silence that rises from the rainy and vivid green forest that surrounds these 13th-century temples. And because my memory works in musical phrases, writing L.I.T.A.N.I.E.S has become my method of remembering the peace I found while visiting Japan as well."

Needing a librettist to author words for his music, he contacted Nick Cave. The pair had already worked together on the 2014 opera Shell Shock, about the horrors of war. Lens recalls: "I wanted to work with someone who was fresh to the field of opera; someone who was most believable and authentic in the way they would use words. Nick was obviously that person."
Cave takes up the story: "Nicholas called me during lockdown and asked if I would write '12 litanies'. I happily agreed. The first thing I did after I put down the phone was search 'What is a litany?' I learned that a litany was 'a series of religious petitions', and realised I had been writing litanies all my life."

He wrote 12 lyrical pieces that tracked the birth, blooming, fracturing and eventual rebirth of a human being and which were "petitions to a divine maker demanding some sort of cosmic acknowledgement". To Lens, the term suggests "a pure form of poetry… a lyrical form of minimalism which might lead to a trance-like state", and he acknowledges that both men have entirely different ideas about what L.I.T.A.N.I.E.S means.