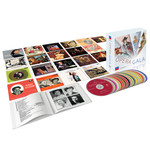 From Adam to Zandonai, from 1954 to 1996, 20 CDs made up of no less than 28 Decca opera recordings, most of them recorded as highlights albums, many long unavailable, newly remastered and all featuring the greatest singers of their age.

In bygone years, before 24/7 streaming, recorded music was less readily available than it is now. Complete opera sets were an expensive luxury; yet opera, and singers, still captured the classical music public's imagination like no other genre. The advent of LP allowed for up to an hour's highlights from a stage-work, including the most popular arias and numbers, to be issued in a single, cost-effective product. Listeners who baulked at the cost of Solti's Ring cycle could nevertheless acquire Birgit Nilsson singing the Immolation Scene on one side the climactic scene of Salome on the other. But with John Pritchard in charge she also recorded a sequence of scenes from Verdi's Aida in 1963, and four years earlier the first-act scena from Tristan with Grace Hoffman as Brangäne and Knappertsbusch in Vienna.

Many of these 'highlights only' recordings have fallen from currency, but now we can all relive the pleasures of Regina Resnik's Mistress Quickly and Luigi Alva's Fenton (excerpts from Falstaff, 1963) and Marilyn Horne's first recorded Carmen (with her husband Henry Lewis, 1970). A sequence of rare Baroque operas features the most famous husband-and-wife team of all, Richard Bonynge and Joan Sutherland, in vocally spectacular excerpts from operas by Bononcini, Graun and Handel; Monica Sinclair's 'Si spietata' from Giulio Cesare is an astonishing piece of Baroque virtuosity. Meanwhile single-act operas (notably Cimarosa's Il Maestro di capella with Fernando Corena, 1960) Wolf-Ferrari's Il segreto di Susanna, 1976, directed by Lamberto Gardelli) and single acts of Wagner (the first and third acts of Die Walküre in Vienna, 1957) enjoyed all the attention to engineering and dramatic effect for which Decca's production team was famous.

Further highlights albums functioned as artist showcases: for the superb Greek-French mezzo Irma Kolassi in Berlioz and Massenet's Werther; Horne again in rare Rossini; and Lisa della Casa reprising her most notable Strauss heroines. The booklet of this uniquely compiled new set includes a new essay by Andrew Dalton on the history of opera highlights on disc as well as many treasurable artist and session photos: Resnik and her luggage, Nilsson and her Valkyrie's steed, Sutherland and her son in full cowboy rig.

'Lisa della Casa is an enchanting Arabella whose voice blends ideally with the no less clear but harder-grained soprano of Hilde Gueden.' The Record Guide, 1955 (Strauss, Arabella)

'A fascinating disc … A pure, heroic style is what [Nilsson] gives us on this record. The many exposed notes have a ping about them, and one tenses with excitement at the accuracy.' Gramophone, October 1963 (Verdi, Aida)

'Everything that sounds a bit contrived in Evans's portrayal [of Falstaff] sounds natural in Corena's; there is more bubbling fun, more bite, more elegance in the pointing of words… This sounds like a lovable. genuinely funny Sir John ... these passages play well even out of context.' High Fidelity, March 1964 (Verdi, Falstaff)

'The result is far more spectacular and exciting Handel than one is used to hearing.' Stereo Review, April 1965 (Handel, Giulio Cesare)

'Ghiaurov's contribution … is equal to the best I have ever heard.' Gramophone, September 1967 (Boito, Mefistofele)

'[Sutherland] is heard in only two arias - but what arias they are! And how she sings them!' Stereo Review, February 1969 (Graun, Montezuma)

'Spectacular is the word for Marilyn Horne's achievement here. These Rossini excerpts offer the most intricately contrived, the most excessively ornamented, and the widest-ranging vocal music imaginable … Miss Horne triumphs over them fearlessly … in this splendid display of golden-age -quality singing.' Stereo Review, August 1973 (Rossini, L'assedio di Corinto etc)

'Maria Chiara as Susanna is sweet and charming throughout ... this triumphant recording should vastly increase the number of [the opera's] turntable partisans.' Stereo Review, June 1977 (Wolf-Ferrari, Il segreto di Susanna)

'Sumi Jo is on top form, her sparkling coloratura diamond bright and effortlessly fluent … With effervescent playing from the WNO Orchestra and engaging, idiomatic singing from John Aler and Michel Trempont, this is a delightful confection.' BBC Music Magazine (Adam, Le toréador)

'If you have an interest in vocal music, this set is recommended with unreserved enthusiasm.' Fanfare, November 2017 (Kolassi singing Berlioz and Massenet)