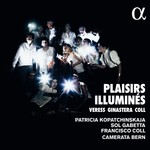 This recording presents the double concerto for violin, cello and orchestra of the Spanish composer Francisco Coll, born in 1985. Les Plaisirs Illuminés, a title inspired by Dalí's painting of the same name, is rooted in Spanish traditions, including flamenco, yet is resolutely modern: 'Its music is very lively rhythmically, it dances and sings - but at the same time it is very abrupt, always in search of extremes', says Patricia Kopatchinskaja. For this world premiere conducted by the composer, she is reunited with a longstanding partner who pursues an equally brilliant international career, the cellist Sol Gabetta. The programme also features Stravinsky's Concerto in D for string orchestra, composed in 1946 at the request of Paul Sacher for the twentieth anniversary of the Basler Kammerorchester, and the Musica concertante for twelve strings by the Hungarian-born Swiss composer Sándor Veress, premiered by the Camerata in Bern in 1966. A year earlier, the Argentinian composer Alberto Ginastera wrote his fascinating Concerto for Strings. A kaleidoscope of colours and sounds from all over the world...

"Musica concertante and Ginastera's Concerto are both concerti grossi, which allows Kopatchinskaja to take on the roles of concertante soloist, section leader and indeed director, as both works, following Camerata Bern tradition, are given without a conductor. As such, she is very much part of an ensemble of equals, and the playing throughout is superb in its focus, precision and concentration." Gramophone Magazine January 2021 Editor's Choice

"The disc is as much a portrait of the remarkable Camerata Bern as it is another showcase for Kopatchinskaja's dazzling virtuosity...both string works are played with remarkable finesse and precision, without a conductor…[Gabetta's] partnership with Kopatchinskaja is very much one of equals, with each seeming to push the other on to even more brilliance." The Guardian

"Two threads run through this adventurous disc - the spirit of Béla Bartók and the Camerata Bern's prowess - but the force of personality at the centre of it all comes from the violinist Patricia Kopatchinskaja...It opens with Sándor Veress's Musica concertante per 12 archi, written in 1965-6 for the then newly formed Camerata Bern, and which in this performance comes across with fiery, searing spirit" BBC Five Stars