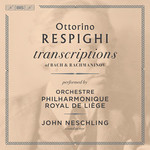 A great orchestrator adds new colours to music by Bach and Rachmaninov.

Founded in 1960, the Liège Royal Philharmonic (OPRL), which has 97 musicians, is recognized for its strong identity in the European musical world, linked to its distinctive artistic and geographical position at the crossroads of the Germanic and Romance spheres, reflecting the age-old history of Liège: it combines the density of Germanic orchestras with the transparency of their French counterparts. Over more than half a century, the OPRL has shown its openness to different repertoires and has developed a reputation, in particular, for its performances of French music and of contemporary works. The OPRL has recorded more than 80 discs; most have been widely acclaimed by the international press. It tours regularly: since 1999 it has undertaken nine tours which have taken it to, for example, Spain, South America, the Musikverein in Vienna, the Théâtre des Champs-Élysées in Paris and the Concertgebouw in Amsterdam. The OPRL currently gives more than 80 concerts a year, of which half take place in Liège. Since 2000 it has also run the Salle Philharmonique in Liège and expanded the range of concerts there to include baroque music, world music, chamber music, and major recitals on piano and organ.

The Brazilian-born conductor John Neschling is a grand-nephew both of the composer Arnold Schoenberg and of the conductor Arthur Bodanzky. He studied in Vienna under Hans Swarowsky and attended classes with Leonard Bernstein and Bruno Maderna in Europe and in the USA. Orchestras he has conducted include the Vienna Symphony Orchestra, London Symphony Orchestra, Zürich Tonhalle Orchestra, Warsaw Philharmonic Orchestra, Pittsburgh Symphony Orchestra, the Orchestra of Santa Cecilia in Rome and the Residentie Orchestra in The Hague. As an opera conductor he has appeared all over the world with, for example, the Vienna State Opera, Deutsche Oper Berlin, Teatro San Carlo di Napoli, Arena di Verona, Opernhaus Zürich and Washington Opera.

Transcriptions for orchestra by Ottorino Respighi of: