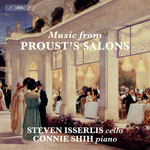 Acclaimed worldwide for his technique and musicianship, the British cellist Steven Isserlis enjoys a distinguished career as a soloist, chamber musician and writer. He appears regularly with the world's leading orchestras, including in recent seasons the Berlin Philharmonic Orchestra, the Philharmonia Orchestra, the Budapest Festival Orchestra, the Cleveland Orchestra, the NHK Symphony Orchestra and the Mahler Chamber Orchestra. As a chamber musician he regularly devises and performs in series for major venues and festivals all over the world, including London's Wigmore Hall and the Salzburg Festival. He takes a strong interest in period performance, playing regularly with many of the foremost original instrument ensembles. He is also a highly-regarded exponent of contemporary repertoire, and has premièred many new works including John Tavener's The Protecting Veil, Thomas Adès's Lieux retrouvés and Wolfgang Rihm's Concerto in One Movement.