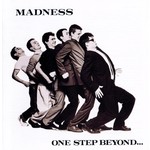 One Step Beyond is the 1979 debut album by the British ska-pop group Madness.

The album, which was recorded and mixed in about three weeks, peaked at number two and remained in the UK Albums Chart for over a year. It was the first album produced by the Clive Langer and Alan Winstanley team, who would go on to work with artists such as Elvis Costello and the Attractions, Morrissey, Dexys Midnight Runners, They Might Be Giants, and David Bowie as well as producing many more Madness albums.