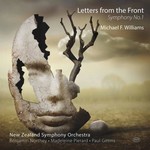 Michael Williams is a well-known figure in New Zealand composition. He has received commissions from most of the country's major musical institutions including the NZSO, NBR New Zealand Opera and Chamber Music New Zealand and his music is regularly broadcast on Radio New Zealand Concert. He has recorded a number of works through the Atoll label.

His 30 minute-long work "Letters From The Front" iis symphonic in scope, but includes sung and spoken texts based on letters written at the European Front of WW1, including a moving letter from his own great grandfather who was soon to die at the Somme.