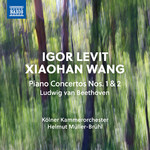 Igor Levit made his recording debut with a performance of Beethoven's First Piano Concerto when he was 20 years old, long before he became a superstar of the classical music world and a major interpreter of Beethoven's music. The occasion was part of the series Das Meisterwerk ('The Masterpiece'), in which Levit was accompanied by the superb Cologne Chamber Orchestra conducted by Helmut Müller-Brühl. Evidence of what was to become the hallmark of Levit's Beethoven style, not least his distinctive fingering technique, is already apparent in this performance, in which the youthful spirits of both composer and performer are well matched. Performed in Cologne's Philharmonic Hall, it is the only commercially available recording to feature Levit with orchestra.

The album also contains a performance of Beethoven's Second Piano Concerto, with Xiaohan Wang as soloist. Both artists had secured this special performance opportunity as semi-finalists in the 2005 International Beethoven Competition Bonn.