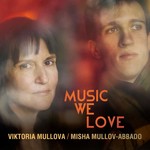 Violinist Viktoria Mullova and son, the bassist Misha Mullov-Abbado in music they love - a very personal and affectionate collection of music ranging from traditional Brazilian folk songs to JS Bach, via Antonio Carlos Jobim and Schumann.

Much of the music on this album has been played by mother and son together for many years - classical and contemporary jazz, folk songs from family music making has now made it to their concert programmes.

"'Music We Love' could seem a bit of a cop-out as a theme, but the disc has a certain coherence despite its eclecticism, containing as it does everything from classical music, contemporary jazz, Brazilian jazz, folk songs and new works by Mullov-Abbado himself. For one, the blend of double bass and violin duo sounds like nothing else. The pairing at times feels spare and melancholy, such as in the duo's intuitive account of Schumann's 'Träumerei'" Classical-music.com