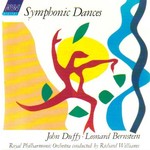 .As founder and president (1974-1995) of Meet The Composer, an Organization dedicated to the creation, performance, and recording of music by American composers, John Duffy initiated countless programs to advance American music and to aid American composers. But there is another side to John Duffy. He has composed more than 300 works for symphony Orchestra, theater, television and film.