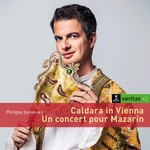 Philippe Jaroussky, one of the foremost countertenor opera singers today, has a passion for enlightening neglected composers. This is masterfully exemplified by his first recital, Un concert pour Mazarin, and the best-seller album Caldara Arias gathered here.

"Jaroussky, a male soprano rather than a a countertenor, brings this obscure repertoire to life: seamless legato, fluent runs and - unlike some of his confrères - no cause for alarm above the stave." Gramophone Editor's Choice January 2011 (on the Caldara)

"Although Philippe Jaroussky's strident vocal timbre won't be to everyone's taste, his musicality and technique are indisputable and the Concerto Köln under Emmanuelle Haïm provides vigorous accompaniment." The Telegraph (on the Caldara)