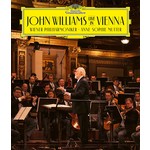 John Williams in Vienna, the legendary composer's chart-topping new album with the world-famous Vienna Philharmonic Orchestra, has become the best-selling orchestral album of 2020. It has earned over 150 million streams and 100,000 sales since its release in August. Now, Deutsche Grammophon is offering fans a new Live Edition, featuring six bonus tracks and on-stage commentary from the composer.