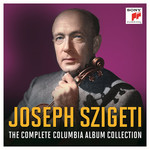 Sony Classical is pleased to announce the release of a 17-album box set collecting the recordings made between 1940 and 1956 for American Columbia by the renowned Hungarian violinist Joseph Szigeti. Szigeti had a remarkable career. Born in 1892 in Budapest, where he studied with Jeno Hubay, one of most celebrated virtuosos and teachers of that golden era of violin playing, he was praised by the iconic German violinist Joseph Joachim at his Berlin debut in 1905; lived in London for several years following his acclaimed 1907 debut and played chamber music with, among others, Myra Hess and Ferruccio Busoni; was a frequent visitor after the war to the Soviet Union, where he introduced Prokofiev's First Violin Concerto; made his triumphant American debut at Carnegie Hall under Stokowski in 1925; toured the world during the 1930s before finally settling in the US in 1940. It was in that year that Szigeti renewed his friendship with fellow Hungarian émigré Béla Bartók, and in April the two gave a now-legendary recital in Washington which featured Bartók's First Violin Rhapsody of 1928 - a work dedicated to and premiered by Szigeti in Europe.

In May 1940, Columbia recorded their interpretation of this "vehicle for Szigeti's biting and wholly magnificent fiddling" (MusicWeb International) in New York. That performance appears here for the first time on album along with another important work by Bartók, the classic first recording of his Contrasts for clarinet, violin and piano, written for and performed with Szigeti and Benny Goodman. The rest of the new collection displays many more treasures of Szigeti's passionate dedication to chamber music: in Bach, Handel, Tartini, Mozart, Beethoven, Schubert, Brahms, Dvorák, Debussy, Ravel, Bloch, Busoni, Prokofiev, Stravinsky and Henry Cowell, collaborating with such artists as Andor Foldes - another Hungarian émigré - as well as with Mieczyslaw Horzowski, Myra Hess, Pablo Casals and Igor Stravinsky.

"(This Sony 17 Cd set) of recordings by the phenomenal Hungarian violinist Joseph Szigeti (1892-1973), made between 1940 and 1956 for American Columbia. Remastered from the original analogue discs and tapes, the sound is generally bright and clean....The 31 works, from sonatas to chamber works to concertos, span Bach and Beethoven to Debussy, Ravel, Busoni and Henry Cowell. Bartók is pianist in his own Rhapsody No 1 for Violin and Piano. All the Brahms, including the Trio No 2 in C major with Hess and Casals, is to treasure. Szigeti plays Dvořák with grace and melancholy, and gives bite and attack to Stravinsky. The style may be redolent of another era, yet still this playing speaks to us. Full of immediacy - and star turns - these remastered recordings make for a compelling time capsule" The Guardian