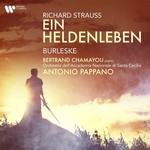 Antonio Pappano conducts Rome's Orchestra dell'Accademia Nazionale di Santa Cecilia in two works from the earlier phase of Richard Strauss's career: a comparative rarity, the mercurial, virtuosic Burleske for piano and orchestra, with Bertrand Chamayou as soloist, and the epic autobiographical tone poem Ein Heldenleben, one of the composer's orchestral masterpieces. "Strauss always thought dramaturgically," says Pappano. "Recording this music in Italy, the link has to be through opera, with all its theatricality, temperament, contrast and colour …You need a certain charisma in the sound, which these players achieve."

Bertrand Chamayou is one of today's most strikingly brilliant pianists, recognised for his revelatory performances at once powerfully virtuosic, imaginative and breathtakingly beautiful.

Heralded for his masterful conviction and insightful musicianship across a vast repertoire, the French pianist performs at the highest level on the international music scene. He is recognised as a leading interpreter of French repertoire, shining a new light on familiar as well as lesser known works, while possessing an equally driving curiosity and deep passion for new music. He has worked with composers including Pierre Boulez, Henri Dutilleux, György Kurtág, Thomas Adès and Michael Jarrell.

'His Santa Cecilia Orchestra has become a force to be reckoned with under his directorship, and the playing throughout is wonderful in its focus and clarity.' Gramophone Editor's Choice June 2021