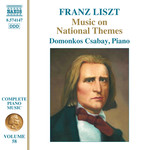 Franz Liszt was born in 1811 at Raiding in a Germanspeaking region of Hungary. His father, Adam Liszt, was a steward in the employment of Haydn's former patrons, the Esterházy princes, and an amateur cellist. The boy showed early musical talent, and with the support of members of the Hungarian nobility was able to move with his parents to Vienna, where Liszt took piano lessons from Czerny and composition lessons from the old court composer Antonio Salieri, who had taught Beethoven and Schubert. In 1823 the Liszts moved to Paris, where, as a foreigner, Franz Liszt was refused admission to the Conservatoire by Cherubini, but was able to embark on a career as a virtuoso, with the help of the piano-manufacturer Erard.