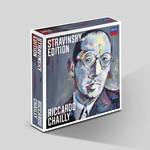 When he conducted music by Igor Stravinsky for the first time at the age of 15, a fascination began for Riccardo Chailly that continues to this day. To commemorate the 50th anniversary of the composer's death, he is presenting his complete recordings of Igor Stravinsky in a high-quality collection together with renowned orchestras such as the Rundfunk-Sinfonieorchester Berlin, the Gewandhausorchester Leipzig and the Lucerne Festival Orchestra. With a total of 30 works on 11 CDs, Chailly creates a mixture of orchestral and ballet pieces, which appear on the album in chronological order with regard to the date of composition. The highlights include chamber music works such as Dumbarton Oaks and Danses Concertantes, which were originally recorded for the Dischi Ricordi label and are now being released on CD for the first time, as well as the worldwide exclusive recording of the rediscovered Chant funèbre, recorded with the Lucerne Festival Orchestra.

The artwork includes a portrait of the composer painted by British artist Steph Fonteyn, commissioned by Stravinsky's granddaughter Marie Stravinsky. The 100-page booklet, which includes a text by the author Stephen Walsh and an interview with Riccardo Chailly by Gramophone magazine editor-in-chief James Jolly, offers further exclusive insights.

"In every respect this collection cannot be recommended too highly." - Rosette (highest rating) Penguin Stereo Guide [on the Chamber works]