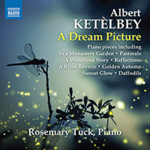 Albert Ketèlbey reached such a pinnacle of eminence and popularity that in 1929 he was named as Britain's greatest living composer, based on the number of performances of his works. His original pieces for solo piano range from serious concert works to salon charmers, always characterised by strong melodies, distinctive rhythms, and unexpected phrases, as can be heard on this album. One of his most well-known pieces, In a Monastery Garden, is featured in its original version for solo piano.

More Honourable Than The Cherubim