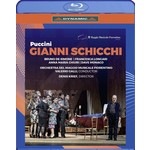 "Bruno de Simone is an amiable, bespectacled Schicchi who could win anyone around with his mellow voice and floral shirt. He sparks off nicely against Anna Maria Chiuri, an unusually young 'vecchia' Zita, who brings a welcome vocal freshness to the role...The young ensemble cast members act and sing their socks off but the hammy stage business, excruciating stock opera dance moves and a very silly notary give the impression of a director trying too hard." 3 out of 5 stars BBC Music

"Krief's modern-dress comedy is well-drilled rather than sharp...Yet there's plenty to enjoy; Chiuri's imperiously well-groomed Zita is much less antiquated than we're used to, while Dave Monaco (the lighttoned Song Peddler of Il tabarro) makes a sunny Rinuccio...Bruno de Simone [is] a seasoned artist who knows better than to overplay Schicchi, placing his markers as cleanly and genially as Galli in the pit- vocal ensemble is notably tight, and Puccini's wit sparkles" Opera