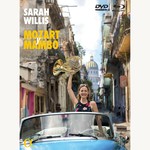 After the resounding success of the album Mozart y Mambo (ALPHA578), this DVD/Blu-ray presents a recording of a concert in Havana and a documentary following in the footsteps of Sarah Willis in Cuba, with the now celebrated Rondo alla mambo, backstage footage, a 'making-of' and other extras. The concert combines the music of Mozart with traditional Cuban repertoire. The world's most famous lady horn player is accompanied by the Havana Lyceum Orchestra and its ebullient conductor José Antonio Méndez Padrón, with the complicity of the musicians of The Sarahbanda and The Havana Horns. Released in a DVD and Blu Ray package enriched by seven bonus features.