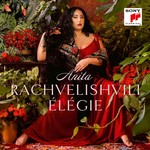 "Élégie" is the second Sony release from Anita Rachvelishvili, showcasing her in the song repertoire to which she has a special connection despite being best known as a star of the world's greatest opera houses. Accompanied by acclaimed pianist Vicenzo Scalera, this album reveals another side to the Georgian singer; the repertoire is notable for its variety featuring five languages (Russian, Georgian, Italian, French and Spanish) and, correspondingly, five very different repertoire traditions. One of the fastest rising opera stars of recent years and winner of 'Best Singer' at the 2020 Oper! Awards, Anita has been described as Riccardo Muti as "without doubt the best Verdi mezzo-soprano today on the planet". Echoing her debut album of operatic arias on Sony, she introduces listeners to a great if internationally neglected Georgian composer, in this case Otar Taktakisvili, heard in The Sun of October, a setting of the distinguished Georgian poet Galaktion Tabidze, as well as Rachmaninov's setting of the Pushkin poem Oh never sing to me again and Tchaikovsky's None but the lonely heart. "I really love this repertoire. It gives one more colours and more possibilities for expressing emotions with the voice", says Anita Rachvelishvili. During Covid-19, she has remained in demand whether appearing in the Metropolitan Opera's online At Home Gala or live with Greek National Opera in Athens. But in a year dominated by isolation, this album (recorded in her home city of Tbilisi just a few weeks before the shutters came down) shows that there is beauty in musical introspection.