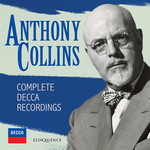 Including several recordings new to CD, the complete published Decca legacy of noted Sibelius conductor Anthony Collins is collected for the first time on disc.

From the earliest days of his career, Anthony Collins (1893-1963) earned a reputation as a musician of parts: violist, conductor, arranger and composer. He had led the viola section of the London Symphony Orchestra under Beecham and Mengelberg before swapping bow for baton in the 1930s, and by then had already begun to promote the music of Sibelius. Then Hollywood came calling, and he spent the War in the US as an Oscar-nominated film composer writing for RKO Studios.

He began to record for Decca directly after the War, first of all with the London Mozart Orchestra which he had founded shortly before leaving for the US. Renowned by then as a Mozartian of natural gifts, securing shapely and stylish performances independently of either the grand Viennese tradition or the period-instrument movement in its infancy, he accompanied the pianist Friedrich Gulda - a kindred spirit of similarly mercurial imagination - in concertos and concertante works by Mozart and Strauss, and then Peter Katin in Mendelssohn, and Moura Lympany in Rachmaninov. He re-established a close rapport with the LSO, conducting them in several albums of Elgar, Vaughan Williams and Delius that have rarely been equalled for their directness of expression and intensity.

These virtues still distinguish the cycle of Sibelius symphonies and tone-poems, made in the mid-50s with the LSO, from later interpretations. A generation of English and American listeners learnt their Sibelius from these recordings, and Collins's deep fellow-feeling for his music stands the test of time. The Decca recordings included a Tchaikovsky album of Capriccio Italien and Francesca da Rimini as well as a pair of his own compositions, and other masterpieces of English light music by Walton - a complete Façade - Sullivan and Grainger. Items never previously issued on CD include dance suites from Hänsel und Gretel and Der Rosenkavalier, as well as the Mozart Symphony No.33 which began his relationship with the label. The booklet offers full discographical details as well as an essay on Collins's life and career by Peter Quantrill.

"A fine recording … a lively performance, and the excerpt from Humperdinck's Hansel and Gretel, on the reverse is equally good." Tempo, Autumn 1953

"A faultless recording was required here and the artists have been rewarded with one." Tempo, Winter 1954 (Walton)

"This is a most beautiful record … Paris is a flawless achievement. The conductor has shown great cleverness in combining the Toulouse-Lautrec side of this luxurious music with the tender passages which offset it … The recording is so good that one forgets the presence of the gramophone." The Record Guide, 1955 (Delius: Paris, etc.)

"The performances are in the best sense traditional, and in the Introduction and Allegro Anthony Collins has been at pains to make the quartet of soloists clearly distinguishable from the main body of players" The Record Guide, 1955 (Elgar)

"His reading of the Sixth Symphony is a model of clarity. proportion, and Nordic spirit; and, like most of his other discs in this series, it has been admirably recorded." High Fidelity, February 1956 (Sibelius: Symphony No. 6)

"The Burleske, thoroughgoing Brahms, is vivid, uninhibited, and unserious in a becomingly brilliant performance and recording that complete a disk of first order." High Fidelity, May 1955 (Mozart: Piano Concerto KV 449; Strauss)

"The recording is a superb example of London's sound at its best. Under the direction of Collins, a very knowledgeable musician in media like these, there emerge performances that glow with an inner light. There is faultless balance, fine pace, a high finish." High Fidelity, January 1953 (Elgar, Vaughan Williams)

"There are those who (justly) count Anthony Collins's magnificent account of the First Symphony as the finest ever put on disc, for the tension throughout the performance is held at the highest level … The closely integrated Seventh is also well understood by Collins.' Penguin Guide, 1996 (Sibelius: Symphonies)

"The performance is superb, held together with a tension that carries the listener through from the first bar to the last." Penguin Guide, 1996 (Sibelius: Symphony No.2)

"[Sibelius's Fourth Symphony] as a whole has extraordinary underlying intensity. With Collins, every phrase breathes naturally … The performance of No. 5 carries all before it." Penguin Guide, 1996

"This is ideal Mozart: no tampering with dynamics or tempos, great clarity, and winning distinctiveness." Fanfare, March 2012 (Mozart: Piano Concertos)

"These interpretations imply a Sibelius you won't hear again, and that's the reason I think you should own them." Fanfare, July 2008 (Sibelius)

CD 12
FREDERICK DELIUS (1862-1934)
The Walk to the Paradise Garden (Intermezzo, from A Village Romeo and Juliet)
A Song of Summer
Brigg Fair - An English Rhapsody
On Hearing the First Cuckoo in Spring
Paris (The Song of a Great City)
London Symphony Orchestra
ANTHONY COLLINS