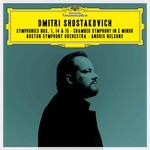 In this installment in 'an ongoing Shostakovich survey that has rightly won him three Grammy Awards' (New York Times), Andris Nelsons and the Boston Symphony Orchestra bookend the composer's brilliant, often turbulent symphonic career. Nearly half a century lies between Shostakovich's triumphant debut with the 'First', premiered before his 20th birthday, and the 'Fifteenth', an inventory of influences written under the shadow of his own mortality. Penned just two years earlier, the 'Fourteenth' is a symphonic song cycle, and the Chamber Symphony is a skillful adaptation of that tragic masterpiece, the Eighth String Quartet.

"No question that this latest release represents the Nelsons cycle at its best." Gramophone Editor's Choice August 2021

"Fascinating couplings…The soloists in the 14th - a death-obsessed song-symphony dedicated to Britten - are outstanding." Sunday Times