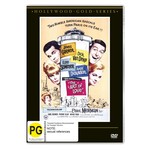 The Art Of Love

Having failed to establish himself as a painter in Paris, Paul Sloane (Dick Van Dyke) decides to return home to his wealthy girlfriend, Laurie Gibson (Angie Dickinson). His roommate, Casey Barnett (James Garner), argues that Paul should fake his own suicide, which will make his paintings much more popular. With Paul presumably dead, demand for his work soars. When Casey grows wealthy selling it off and begins courting Laurie, an angry, Paul frames his deceitful friend for his murder.