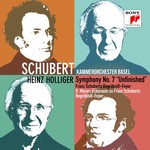 This album closes out the cycle of Schubert symphonies by the Kammerorchester Basel under conductor Heinz Holliger. The orchestra has already recorded the work usually known as the Symphony No. 9 in C major, D. 944 (The Great), and this one contains the next-to-last symphony, the two-movement torso generally known as the Unfinished, the Symphony No. 8 in B minor, D. 759. Nevertheless, Holliger settles on the theme of death here, rather than in the Symphony No. 9, and annotator Roman Brotbeck points out, following Holliger, that the Unfinished has rarely been approached this way. The biographical justification is that around the time of the Unfinished, Schubert became aware that he had syphilis, which he would have known was a death sentence sooner or later. Holliger responds to this idea with an unusually sober, deep interpretation in which the Kammerorchester Basel sounds much larger than it is. There is not a bit of Viennese gemutlichkeit here, and the opening of the first movement is profound and mysterious. Things get more unorthodox still in the rest of the program. Holliger begins with an orchestration of a fragment left unfinished by Schubert at his death; probably intended as part of a symphony, this two-line Andante in B minor seems to be cut from the same cloth as the Unfinished slow movement. Then there is the rarely played Franz Schuberts Begrabnis-Feyer, D. 79, a nonet written by Schubert when he was 16 for his own funeral celebration (no one is quite sure why), and also known as Eine kleine Trauermusik. Holliger suggests that this very odd little piece contains thematic links to the later works on the program, and he includes a modern Echoraum, an elaboration or reflection on it, by Roland Moser, also the orchestrator of the Andante in B minor. Finally, there is the orchestration of the posthumously discovered Six German Dances by Anton Webern, just slightly off-kilter from Schuberts keyboard originals. This is an entirely unorthodox Schubert release that will hold the listeners attention from beginning to end.