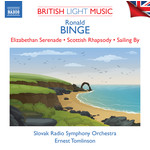 Ronald Binge was one of the most highly respected and successful English composers of his generation. He played a significant role in creating the Mantovani sound, but his big breakthrough came with the Elizabethan Serenade, which became an international hit. The evocative moods and memorable melodies of his best works saw their regular use as themes for TV and radio, and the soothing tones of Sailing By are still in use today as the close-down music for BBC Radio 4.

'one way and another this must be one of the most successful of this excellent series, and it can only heighten the standing of a fine English light music composer' (Gramophone)

'Conductor Ernest Tomlinson - who is also one of the most prolific composers honoured in this series - gives this gentle, winsome music the kind of affectionate touch which brings out all its modest but valid virtues' (Fanfare).