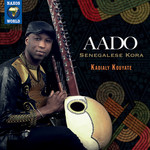 Kadialy's captivating kora skills originate from his long family history of Kouyate griots. Embracing the art of traditional storytelling, via the 21-stringed kora, he draws on his past heritage for inspiration while creating his own uplifting compositions. In the Senegalese society, 'aado' stands for 'moral customs and values'. Kadialy's enchanting songs touch on these principles and reflect on the Mandinka culture.

About Kadialy Kouyate
Since his arrival in the UK, Kadialy has enriched the London musical scene with his griot legacy by getting involved in countless musical projects. Such collaborations include working with Mumford & Sons and Baaba Maal, the multicultural fusion group Rafiki Jazz, Brazilian percussionist Adriano Adewale and Venezuelan harpist Leonard Jacome. Kadialy has performed at many prestigious venues such as The Royal Festival Hall, The Queen Elizabeth Hall, The Royal Albert Hall and the O2 Arena. He has also played festivals across the world while touring Europe, Canada, Australia and North and South America