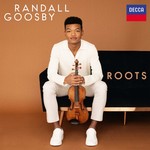 "This is selfless, stylish playing which - paradoxically - ends up by projecting the personalities of both artists with even more freshness and warmth." Gramophone Editor's Choice August 2021

'Roots' is an exploration of the music written by Black composers and inspired by Black culture, it is a homage to the pioneering musicians who paved the way for Randall and his generation. It looks to the future with a specially commissioned piece by young Black composer Xavier Dubois Foley, and includes world premiere recordings of music by Florence Price that were rescued from an abandoned house over half a century after her death. Goosby, a Perlman protégé, celebrates his own journey and shows young people that music can inspire regardless of background. Produced by 2021 GRAMMY Producer of the Year, David Frost.

"Goosby's mentors include Sanford Allen, the dedicatee of Perkinson's pieces and the first black violinist in the New York Philharmonic, and Itzhak Perlman. You can hear the influence of the latter in the suavity and lushness of his playing, never more so than in the slow middle movement of William Grant Still's 1943 Suite: Goosby finds a special tone here, soft but vibrant, and the melody soars." The Guardian

Dvořák:
Sonatina for violin and piano in G major, Op. 100