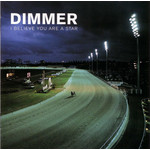 Dimmer's I Believe You Are A Star, released in 2001, is rightly regarded as a classic and one of the great New Zealand records of the 2000s. Written and nearly entirely performed by Shayne Carter, the album was five years in gestation and Carter's first album following the demise of his most well-known band Straitjacket Fits.

Carter writes ; "My main inspiration when writing and recording Star was to make a record entirely different from the rock n roll glory of the Straitjacket Fits. I wanted to make a beautiful record that didn't need to beat it's chest or prove that it could 'rock'. It was influenced by the drift and throb of ambient music, krautrock, electronica, outsider pop and the dark funk of Sly Stone, James Brown and Funkadelic. It was also influenced by a totally naive approach to the then relatively new digital recording process."