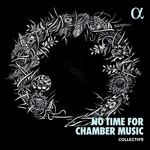 Collectif9 is a Montreal-based string ensemble whose main focus is an original exploration of the classical repertoire, including transcriptions for chamber ensemble of large-scale works. Alpha is starting a collaboration with this innovative group and now presents its very first album, recorded in 2018 and consisting of music by (and inspired by) Gustav Mahler: No Time for Chamber Music, a nod to Luciano Berio's Sinfonia, inspired in its turn by Mahler's Second Symphony. Mahler himself often quoted his own works, and his rich instrumental textures have provided a source of inspiration for composers and arrangers alike. The programme begins with two works drawn from his First Symphony: Comme un bruit de la nature (Like a sound of Nature) and L'Enterrement du chasseur (The hunter's burial), inspired by a woodcut by the nineteenth-century artist Moritz von Schwind in which the animals mourn the death of the hunter. The ensemble's double bass player, Thibault Bertin-Maghit, made the arrangements, while Philippe Hersant has written a Fantaisie based on fragments from a number of works by Mahler.